News from the FRED (Node-RED) team at Sense Tecnic

We're pleased to announce a new service for the FRED platform - InfluxDB - designed for customers who need a managed real-time DB.

InfluxDB is rapidly becoming the standard for the IoT - offering high performance for time series data and a powerful API for rapid development of IoT apps.

STS built and maintain the original Node-RED influxDB nodes, so it's only natural that we should offer a managed InfluxDB service for those customers who need a high performance IoT DB.

You can signup for a plan that supports influxDB using the upgrade button in your FRED UI, just login to FRED then click on upgrade -  or by following this link:

You can read more about the service by looking at the tutorial we've written:

We've been asked a number of times for a lightweight version of FRED that customers can install and manage on their own premises. Recently we've worked with some customers to define exactly what that looks like and have now begun development of our new gateway server. 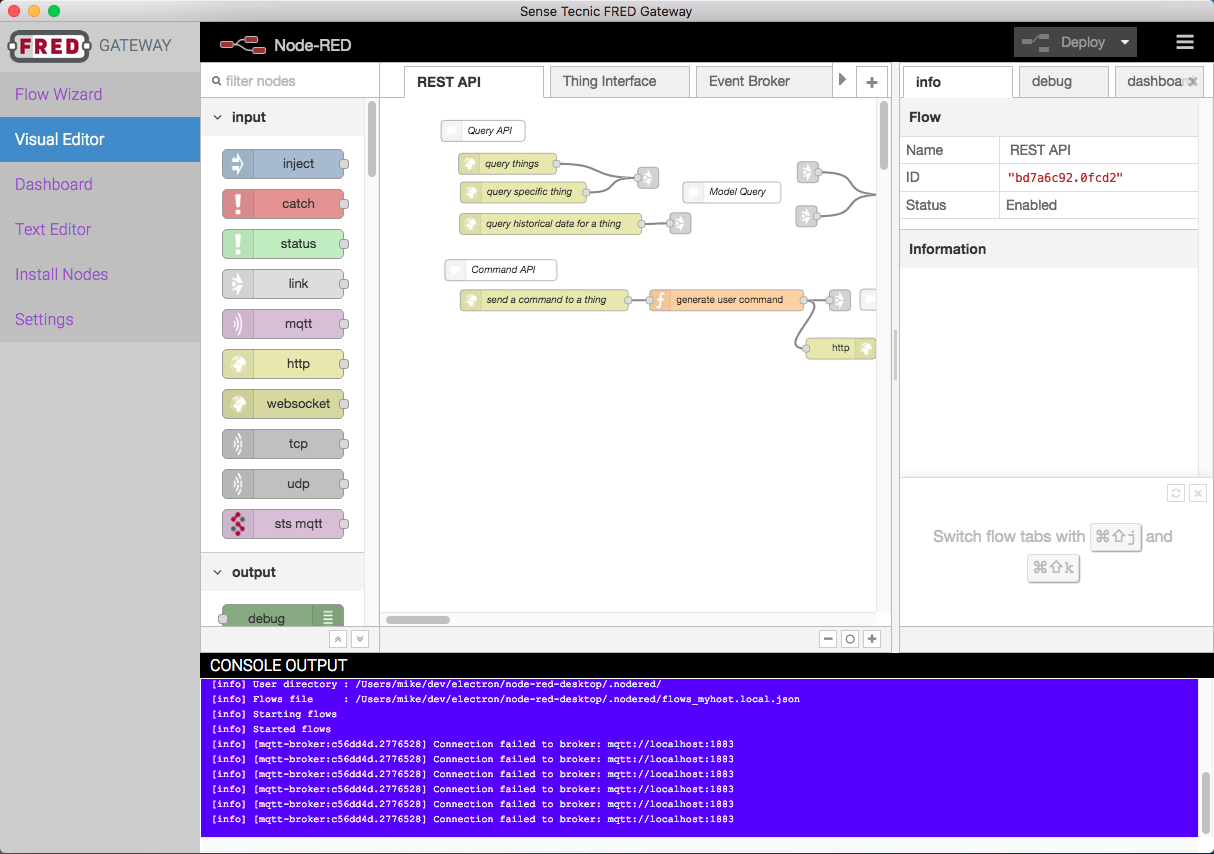 Focused primarily on the IIoT market, the FRED gateway server is designed as a simple, one-click-install server targeted at on-premise PC based gateways. Key features will include:

We're in the process of finishing up the initial beta, so if you'd like to sign up for an early look and try the service out, contact us on [email protected]

We've been having fun over the summer playing around with the new Pi Zero W and in particular with one of the many low cost camera modules. We've developed a simple tutorial that shows how we set up a Pi Zero W, a camera and then used a FRED dashboard to allow remote users to capture the camera feed and display on the dashboard. 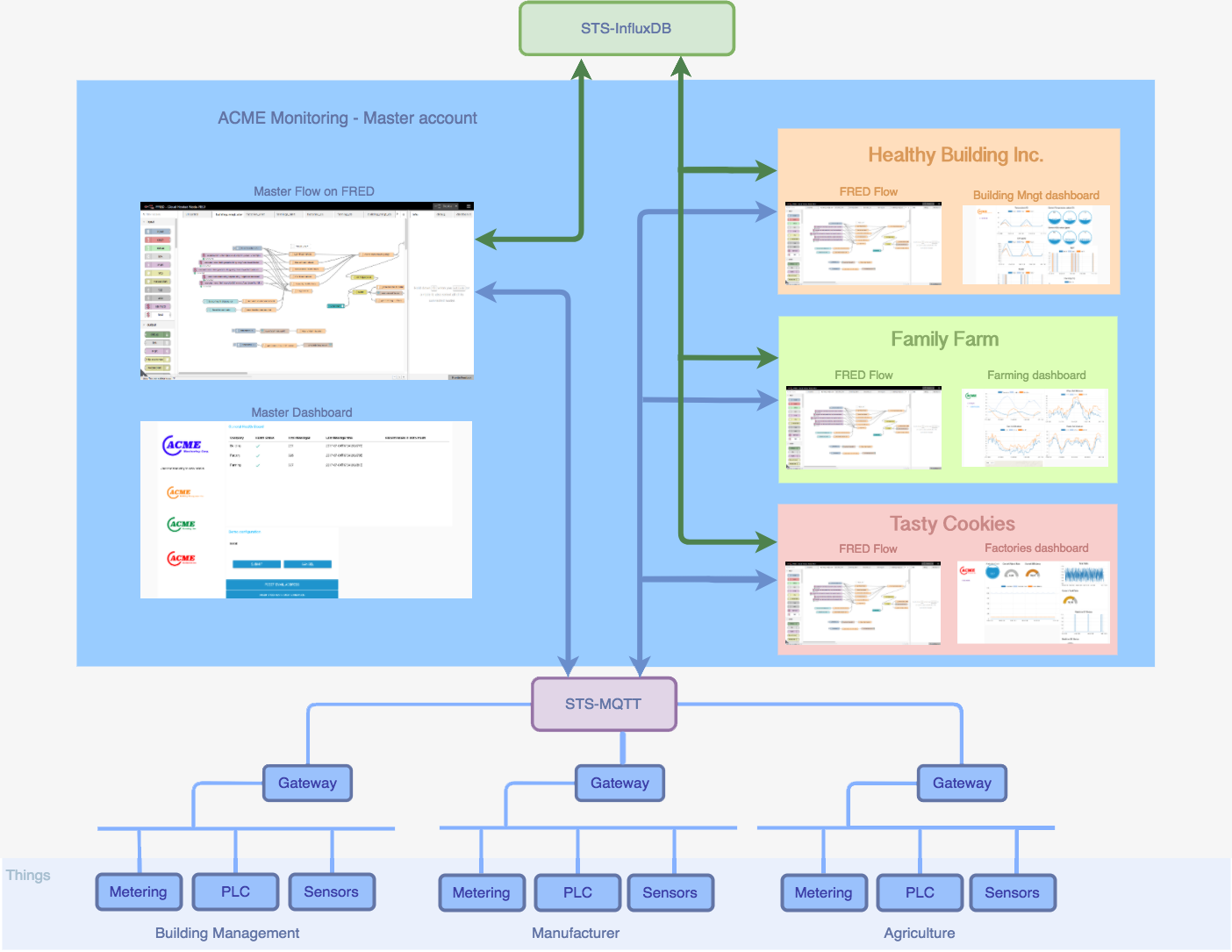 We've talked in the past how FRED can be used to meet this need and we recently developed a live demo to show that feature in action.

In the demo, a company (ACME monitoring) offers monitoring and alerting to a number of customers in different verticals - for each of its customers it provides a dashboard and some degree of monitoring.

You can explore the demo below

We've had several requests from users for support for OSIsoft PI (as well as others such as the Inductive Ignition server). Accessing OSIsoft from FRED can be accomplished using a standard HTTP node and the PI Web API. However, to make it easier we have begun development of a dedicated node and associated tutorial. We'll make that available soon, in the meantime if you have an interest in using FRED to access OSIsoft PI or Inductive Automation’s Ignition Server contact us directly and we can help you get started.

We've been busy updating nodes to the latest releases - let us know if you're favourite node isn't the version you expect. In addition, we've added several new nodes including a Redis node, a what3words node, a geohash node and a Solace message broker node.

MQTT: We've been busy over the last couple of months developing our new MQTT service - we've recently added a new tutorial on using Arduino and the esp8226 WiFi board to send, via MQTT, to FRED

Other MQTT tutorials include:

Using the public topics in STS-MQTT with FRED

InfluxDB: a tutorial exploring how to use our new InfluxDB service is available:

Setting up and Using InfluxDB and FRED

IIoT and OPC: We've refreshed our IIoT tutorial about the use of FRED and OPC-UA which is a secure architecture focused on industrial automation. OPC-UA extends the highly successful OPC communication protocol, enabling data acquisition and information modelling and communication between the plant floor and the enterprise reliably and securely.

IIoT tutorial describing how to use OPC-UA

There’s a variety of documentation available to help you get the most out of FRED and Node-RED - our main set of tutorials are available via the link below.
Tutorials
In addition, a more general set of lectures is available at:
Node-RED Programming Guide

and our user documentation for FRED is available at:

If you have any questions or concerns, please contact us at [email protected].
You can unsubscribe at any time.